ON THE SOURDOUGH TRAIL, PARIS

Springtime in Paris. The warm sunshine is perfect for aimless strolling, serendipity taking us past (and into) shoe shops, fromageries, and so on. The Ladurée shops are beguiling but  crowded with more than a hint of Disney - after all they are just macaroons laced with food colouring. We leave toute suite. 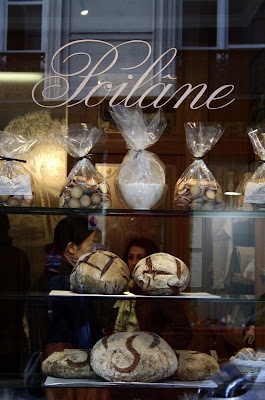 On rue du Cherche-Midi a chance discovery launches us on a mini-pilgrimage, following in the footsteps of American Daniel Leader, as described in his book "Local Breads".  Poilane is the boulangerie established in the 1930s by Pierre Poilane, which produces the most famous sourdough bread in Paris - indeed you can now buy Poilane bread in London.  This, though, is the original bakery, the starting point for the brand now run by Pierre's sons Max and Lionel. Poilane started the renaissance in Paris of the old style, country bread raised by a sourdough culture: pain au levain. 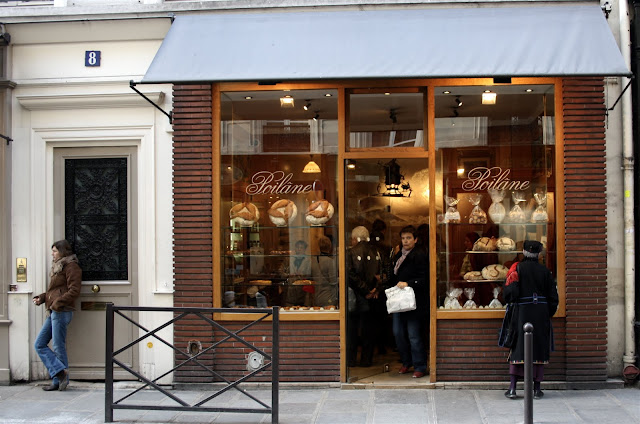 We join a noisy throng of shoppers inside, getting in the way of busy Parisiennes who are keen to snap up the evening's bread on their way home after work.  After browsing, dithering, breathing in the nutty, yeasty smell, we leave clutching flour and bread, but not a branded cushion fashioned into loaves, hilarious as they are. The chewy, crusty loaf doesn't last long; we sit by the Seine, pulling the bread apart, watching the sunset slip down towards the Eiffel Tower as runners jog and romantic couples stroll past along the river bank. A lone trumpeter plays jazz under one of the bridges, the notes echoing out across the water.
The next morning finds us at Eric Kayser's, also in the Latin Quarter, one of Daniel Leader's gurus when he was researching the skills and techniques in the 1980s that would inform his own baking practice in America. 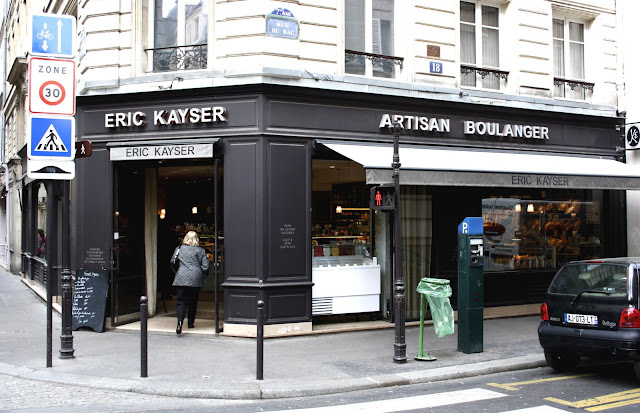 Although one of the pioneers of the new wave of sourdough bread-makers, an "artisan boulanger", the Kayser shops are modern, as are the bread-making techniques he uses. It is Kayser who developed the use of a liquid levain, easier to control than the traditional "stiff" sourdough starter. The bread is light, crusty and has a slightly more pronounced sourness.
If Kayser's is modern in approach and appearance, Le Moulin de la Vierge (rue Vercingetorix) is the opposite. Basil Kamir had been a rock promoter, whose office was in an old bakery in a run-down area in the south of Paris.  The area was scheduled for re-development and the bulldozers had moved in; the only way to save the building was to return the bakery to its original use.  Basil transformed himself from promoter to baker, drawing a traditional baker, Jean LeFleur, out of retirement to teach him. 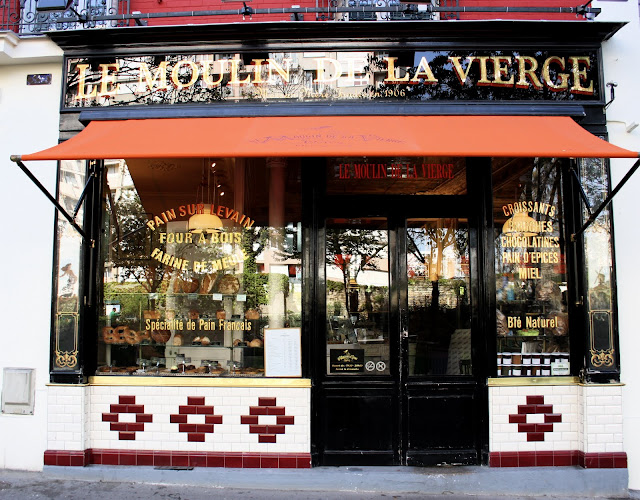 We travel to Pernety on the Metro, arriving in a rather soulless, modern neighbourhood.  The bakery is tucked away in a quiet street of featureless, concrete blocks of flats next to a busy railway.  To go inside is to step into the past. 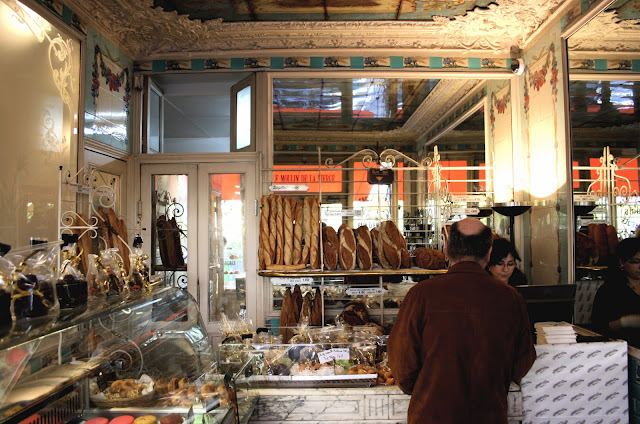 Foxed mirrors are topped by extravagant cornices and the ceiling is a tiled rural scene.  Basil Kamir's bread is traditional, made in the old way and baked in a wood fired oven that is over 150 years old. The baguette we buy and eat (with some powerful cheese from a maitre fromager on the high street) is dense, chewy and delicious. We scan the real estate windows; perhaps we should move to Pernety so that we can feast on this bread every day.
Posted by Paula/Tim at 10:43